Collies who react aggressively to keep some more ‘prized’ resource for themselves – be this food, treats, toys, or something they have taken or ‘stolen’ – can be very difficult to live with, depending on how severe the aggression gets, and who in particular it tends to be aimed at; i.e. other dogs or people, or even owners.

There is no doubt in my mind that this impulse is inherently genetic in dogs. In that dogs will either have a predisposition to behave more aggressively around resources, or they won’t. Though it can also be greatly exacerbated or escalated through the way owners handle it (more on this later). It is not just a problem that can be found in collies. It can be found in all breeds – even those not otherwise thought to have aggressive tendencies. In certain strains or breeding lines of Golden retriever today, for instance, food or resource aggression has become a pretty serious problem.

Like so many genetically related behavioural issues, found in so many dogs today, a vast number of them could be greatly limited or even not exist if the selection of the temperament of dogs chosen for breeding from was made far more rigorous – and taken a lot more seriously by all breeders. Especially given how devastating the later repercussions can sometimes be for both dogs and their owners when more challenging flaws in temperament get passed down, instead, from one generation to the next.

In any litter of young puppies, roughly around the time they are being weaned on to more solid food, which they will share together, the dog with food-aggression issues can soon be spotted. He or she is the one who begins growling or snapping if another puppy edges too close to them when feeding. A wise breeder at this point promptly removes that aggressive puppy from collective feeding with the others, and begins feeding it separately in a special way (again, outlined a bit later). If only to stop the habit becoming more ingrained.

As humans we may see eating with others as a civilised process with more set social etiquettes. But for dogs it can be very different. And many, instead, will instinctively expect it to be a highly competitive process, where anything you cannot hold on to will get taken by others. It is this primal, utterly instinctive fear that flicks the switch on the equally instinctive aggression that goes with it. And it is not a reaction, either, that a dog can always more consciously control.

It is the belief, however, that a dog is more consciously choosing to be nastier, or more challenging, aggression wise, around their food bowl or toys, or bed, or anything else they feel compelled to try to guard in this way, that so often makes the problem escalate. For owners may try to challenge the dog back, in a more hostile way, or grab away his guarded item in retaliation for his/her aggression. Or they may try to more forcefully remove from a dog something he or she has taken and wants to keep for themselves. All this does is ramp up in the dog’s mind the true level of threat others pose around his/her ‘stuff’, and make them even keener to guard it next time.

If you have a dog who shows aggression around a food bowl for the first time, what you should really do is back off and leave it. Then resolve for ever more that your dog will not be fed this way again. Instead put your dog’s empty food bowl on the floor and ask them to sit. Then place one piece of food in it for them to eat. Praise them for eating this without any hostility. Then move on to the next bit of food and the next, one bit at a time, praising your dog each time for showing no hostility. If there are any even vague signs of hostility, simply stop feeding your dog immediately. Wait until the next mealtime to repeat this process. Eventually your dog should learn that not only are you a rewarding, rather than more threatening, presence around their bowl, but the more well behaved they are when you feed them, the more they get to eat.

When it comes to other things like toys, bones, or sofas a dog may try to guard aggressively from others, the question has to be asked as to why you would continue allowing any dog access to these flashpoint items at will, when you do not have to. For no dog can guard what they are not allowed access to. Teaching a collie a proper ‘give’ command can also take all the heat out of them returning something to you on request. Owners might also not be aware that they, themselves, can represent one of the most valuable resources in any dog’s life, and as such, their dog may try to take ownership of them on this basis, and try to prevent other people (including other household members) or dogs getting near you. You must see this for exactly what it is, and not a dog simply being more ‘protective’ or ‘jealous’.

This feature has only been able to touch the surface of resource guarding in dogs, why it occurs and what you should do about it. However food, resource and territorial guarding issues in collies are covered more fully in BOOKS TWO (ESSENTIAL LIFE SKILLS & LEARNING – red cover) and THREE (BEHAVIOUR – INSIGHTS, ISSUES AND SOLUTIONS – green cover) of my BORDER COLLIES: A BREED APART trilogy. 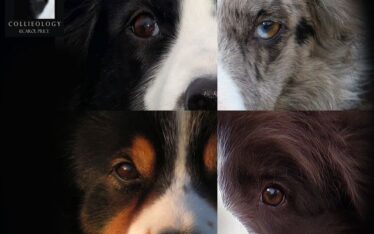 BORDER COLLIES AND NEUTERING/SPAYING – THE PROS AND CONS
Today, the process of neutering or spaying dogs, sometime around or just beyond puberty, has...
19 Likes